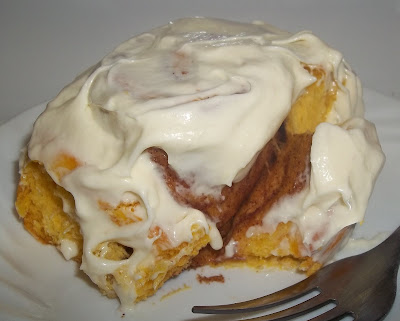 I taught Young Women Manual 1, lesson 8, "Attitudes About Our Divine Roles" yesterday. I found the idea to make divine cinnamon rolls for the lesson here.

I began the lesson by asking what each girl's dream job was. Then I asked them if that particular job could ever be difficult. If they couldn't see how, I helped them. I also asked if their dream jobs could ever be boring. Again, I helped them see situations in each job that could be boring. Then I asked them, "If being a (veterinarian) could be difficult and boring, why would you want to do that?" After they answered, I continued with the lesson pretty much as outlined in the manual.

Between the sections about being a wife and being a mother, I paused and served the cinnamon rolls, calling them "divine rolls", of course. Then I drew a spiral on the chalk board and asked, "What's the best part of a cinnamon roll." They all answered that it was the middle. I labeled the outermost ring of the spiral physical. The next layer was mental; the next was emotional; and the innermost circle was labeled spiritual. I told the girls that when the world thinks of being a mother, they think mostly of the physical needs a mother has to take care of, ie., laundry, bus driving, cooking, cleaning, changing diapers, etc. Those things don't have to be drudgery. Based on the right attitude, they can be fun and fulfilling, however, as you get nearer and nearer to the center, or heart of the divine role of motherhood, you find more and more fulfillment and joy.

Then, of course, I had to hurry through the rest of the lesson.

So here it is, the recipe for Divine Rolls:

Mix all ingredients for the rolls in a mixer bowl. Knead about 6 minutes, adding flour if necessary. Dough should be soft but not sticky. Cover and let rise until doubled in size, about an hour.

Lightly grease a large flat surface and turn dough out onto it. Form a rectangle with the long side closest to you. Lightly grease a rolling pin and roll the dough to about 1/2 inch thickness, keeping the same rectangle shape (just larger). 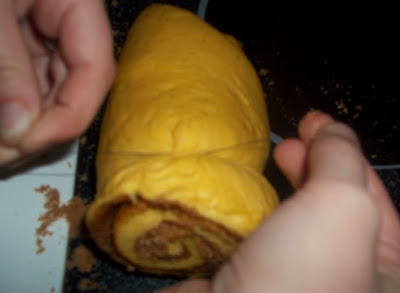 Place the slice of roll in a greased 9 x 13 pan. Repeat until the pan is full. You may need to start another pan of rolls to use up all of the dough.

Now you must make a choice. Do you want to bake them today or tomorrow? If today, cover and let rise until they nearly reach the top of the pan. If tomorrow, spray a piece of plastic wrap with cooking spray and cover the pan, greased side down. Place in refrigerator immediately. When you are ready to bake them tomorrow, you'll need to take them out of the fridge about 1/2 hour before you plan to bake them. Placing a pan of boiling water in the cold oven next to the pan of rolls will help to proof them.

If your rolls are in the oven proofing, remove them. Preheat oven to 350 degrees farenheit. Bake cinnamon rolls about 26 minutes, or until lightly browned on top. Mix the glaze ingredients in a small bowl while the rolls are baking. Immediately after removing the rolls from the oven, spread the glaze evenly over the tops of the rolls.

With an electric mixer, beat the cream cheese and sugar together until smooth. Add the orange juice concentrate and mix thoroughly. Spread evenly over cinnamon rolls while still warm. Serve warm. If you don't use them all while they're still hot, you can reheat them for a few seconds in the microwave.

Note: The winter squash makes your rolls yellow or orange looking, but not one of my young women asked about the color and they all loved them. (They just didn't know they were getting some vitamin A and fiber. My kids don't know, either. Hee hee!)
Posted by The Almost Sane Sisters at 7:16 PM