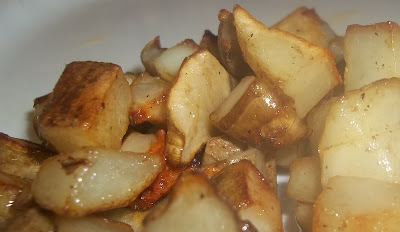 According to Wikipedia, Jerusalem Artichokes got their name from both the italian word for sunflower, "girasole", which got changed into "Jerusalem" by we lame-tongued english speakers and their artichoke-like flavor. They are neither an artichoke nor from Jerusalem, but, as the italian word suggests, the tuberous root of a species of sunflower native to eastern North America.

They provide an amazing amount of nutrition, but contain little starch, so they don't trigger the same insulin response as a potato does, which is what they commonly replace in diabetic diets.

I have always been slightly curious about Jerusalem Artichokes, but never enough to buy them at the grocery store. I participate on occasion in a produce co-op, however, and got a few of them in my basket the last time.

I looked up several recipes online to find out what to do with them, but in the end, I decided that if I want to know what they really taste like, I needed to cook them with little other flavoring.

So I scrubbed them, chopped them up, melted some butter in my frying pan and cooked them with a little salt and pepper.

My oldest daughter had seconds. The second daughter only ate them because we have an "eat what's for dinner or don't eat" rule. The third daughter said that she liked them enthusiastically, but didn't take seconds. And Bear ate all of his. My husband hasn't yet tried them, since he just got home from work. I'm actually looking forward to his reaction, since he doesn't know that they're not potatoes, yet.

I think that they taste less like an artichoke than a very mild parsnip. As you can see, when cooked this way, they look very similar to potatoes, but they don't have the satisfying rich, starchy taste (ya think?). They taste lighter and greener. I would definitely eat them again, but I still like my comfort food.
Posted by The Almost Sane Sisters at 8:29 PM