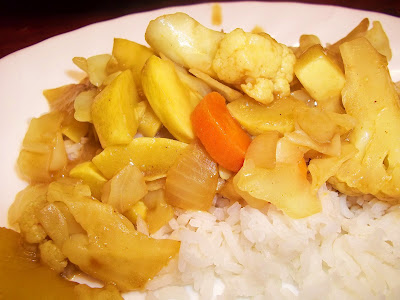 As I said yesterday, I have a lot of produce to use up, and no, it's not all lemons. Good thing, too, because I can only eat so much pie.

Our mom has been making this particular kind of curry since she returned from her LDS mission to Japan. I have made it several times when we've had company and I always get requests for the recipe. There's just one--okay two--problems. 1-There's no recipe and 2-I completely and totally cheat on this one. But I will give you the basic idea.

First, have a bunch of veggies you need to use up (you could buy them for this express purpose, too.) Second get a package of S&B Golden Curry Sauce Mix. It's in the oriental section of stores that carry it. In my town, the only store that carries the mild, which is the version I buy, is Macey's, which is owned by Associated Foods. 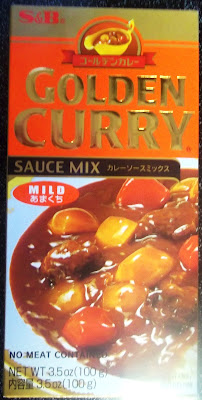 My mom made it pretty much how it's shown on the front of the box, with meat, potatoes, carrots and onions. On the instructions, at least the instructions written in English, it only says to add meat and onions. I use any kind of vegetables I happen to have on hand.

Last night, I used cabbage, onions, carrots, yellow summer squash and cauliflower. I would like to have used more carrots, but that's how much I had. If I had had zucchini, broccoli, peppers or celery, I'd have used them. 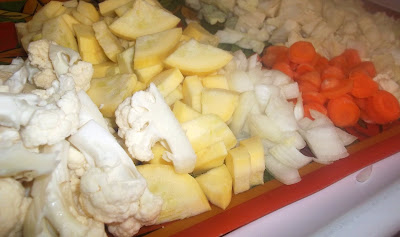 Cut up your veggies in roughly bite size pieces. If you're using meat, cut it into chunks, too. Then saute everything in a couple of tablespoons of oil, starting with the things that take the most time to cook, and adding the things that require less cooking time as you go.

Once everything is mostly cooked, add your curry and water. I use a whole 3.5 oz package of curry with my 12-inch skillet completely full of vegetables. If you're not making that much, don't use as much curry. I also pour in water almost as high as the level of the vegetables.

Now cook it, stirring occasionally, until the curry is all mixed into the water and has formed a thick sauce.

You're done. Serve over rice.
Posted by The Almost Sane Sisters at 12:51 PM