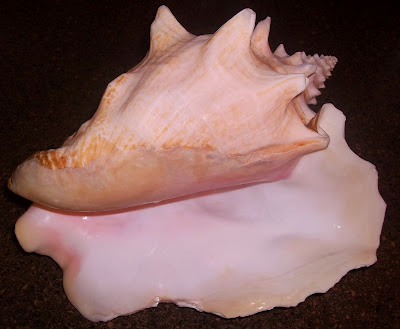 My husband and I just got back from a 6-day vacation to Freeport, the Bahamas. We spent several hours of one day walking up and down beaches, looking for cool shells for our kids. Toward the very end of the day, my husband found a conch (said conk) shell that was whole, but in bad condition. We were pretty excited, since we had found a plethora of conch shells in various levels of badly broken. Not long after that, I found a very small, but whole and in good shape one. Elated, we decided to head back to our hotel.

The next morning, I took a bike (included with our room) and rode to a public beach. I hid the bike in some bushes and walked down the beach, trying to figure out what had dug the holes and made the tracks that we had discovered the night before. (I found out later that they were sand crabs, but I was never successful in scaring one out of its hole.) After a while, I gave up and went back for my bike, but I had hidden it too well. I started searching for it in all of the bushes in the general vicinity, and to my surprise, found a conch shell.

It has definitely seen better days, and I spent the better part of 2 hours scrubbing it today. It was covered with a layer of what looked suspiciously like the wrappers from sushi, so I'm guessing it was kelp. Apparently, a small army of large red ants had also taken up residence. I'm glad I tied it in a grocery bag for the trip home.

Conch is a very popular food in the Bahamas. It's a sea snail, and, next to escargots, it's the most commonly eaten snail in the world. (Which, to me, doesn't say much, since I don't know too many people who eat escargots.)

At our hotel, we were served conch fritters, breaded conch, and conch chowder. The fritters are dough with cut up conch and peppers, dropped in hot oil and fried. Breaded conch is a lot like breaded shrimp, but somewhat frilly and without a tail to be removed. I expected the chowder to be similar to clam chowder, but it was nothing like that. Conch chowder is a tomato-based soup that has chopped potatoes and carrots and a good dash of hot pepper sauce, a long with slices of conch. I must say that I like conch much better than clams. They aren't rubbery at all and have a milder flavor.

If you're curious, this site shows how to remove and clean a conch.
Posted by The Almost Sane Sisters at 7:13 PM