Today my daughter and I baked a yummy, layer, chocolate cake. The only problem was that it wouldn't come out of the pans. We greased and floured the cake pans, but I guess we should have used sugar, instead of flour like the recipe called for.

What do you do with a crumlbed chocolate cake? Make TRIFLE!!

It was delicious, maybe it turned out better than planned. Just make chocolate pudding and whip some cream with some powdered sugar and vanilla, and cut some strawberries. Then you just have to assemble the Trifle. It's pretty easy. I just took the crumbly cake and filled the bottom of a dish with it. Then layered on chocolate pudding, next came strawberries, and next whipped cream. Then I repeated the same steps and put a few more strawberries on top to make it look pretty. Tada! Beautiful, delectable Chocolate Strawberry Trifle. 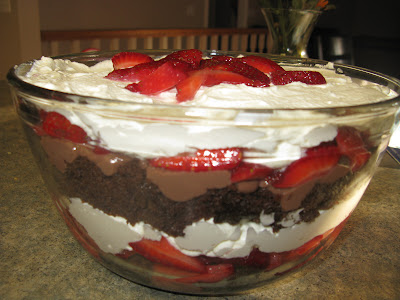 Posted by The Almost Sane Sisters at 5:05 PM