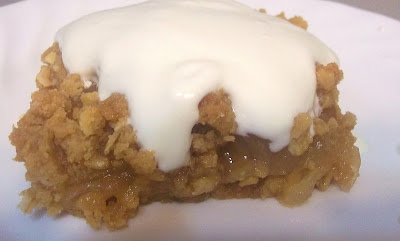 About a month after we were married, I had a bunch of apples and decided I would really love to make (eat) apple crisp. So, I got a little butter, some sugar, flour, oats and cinnamon, mixed them up, sprinkled them over my peeled, sliced apples, and baked it all. I was sure that my new husband would be impressed and delighted by my efforts. Was I ever wrong.
"What are you making?"
"Apple crisp."
"Ohhh. (rolling his eyes back into his head) That's my favorite!"
I pull it from the oven with a flourish.
"What's that?"
"Apple crisp."
"That isn't apple crisp."
He sort-of choked it down that night. And he called his mom the next night to get her recipe.
I watched, dumbfounded, as he carefully measured out the ingredients, tapping the top of the measuring cup with the back of a butter knife, then sliding the excess of the ingredient back into the container. The only time I had ever seen anyone measure like that was when Mrs. R, bless her heart, was teaching home-ec in middle school. (I had been cooking for several years by then, and my style is more of a scoop, dump, and pray for the best style. Alas, I was the proverbial old dog, and I have never learned to measure properly.) I could explain it away by saying that he was in pharmacy school at the time, and learning to compound drugs, so he was used to being very precise, but I think that's how he always does it. I say I think because I'm not entirely certain that I have actually watched him cook anything since then. Lest anyone think he's a perfectionist, he certainly doesn't worry about cleaning up as he cooks.
When his apple crisp was out of the oven and cooled just enough not to burn our mouths, I found out why he didn't appreciate my apple crisp. But it wasn't perfect yet. He came up with a motto for our new family that very night: Less Apple, More Crisp. And I've been making my own version of his mom's apple crisp ever since.
My mother-in-law's recipe for apple crisp actually came from her mother, and I have no idea where it came from before that. But, due to our family motto, I've changed it enough that I doubt I'll have to deal with any intellectual property issues.
Apple Crisp
Crisp
1 cup softened butter
1 cup packed brown sugar
2 cups whole white wheat flour
1/2 teaspoon salt
1 cup rolled oats
Filling
1 cup sugar
1 cup water
2 1/2 Tablespoons cornstarch
1 pinch salt (I don't remember how he measured that one)
3 cups peeled and sliced apples
1 Tablespoon butter
Preheat your oven to 350 degrees F. Place all ingredients for the crisp in a large bowl and cut together with a pastry blender. Use cold butter and white flour if you must, the ingredients (though not the proportions) in the original recipe, and you'll get a yummy apple crisp. If you do it like I said, you'll get one that is probably on the list of the seven deadly sins.
Press half of the crisp mixture into a 9x13 pan. I like to use pyrex, because it bakes so nicely. Reserve the other half of the crisp mixture.
Mix the sugar, water and cornstarch in a medium saucepan. Add remaining ingredients and heat, stirring occasionally until the water is clear and thick. Pour over the crisp mixture in the pan. Crumble the remaining crisp mixture evenly over the top. Bake for 45 minutes.
Whip some cream and prepare to go to the inferno for your sin of self-indulgence.
Posted by The Almost Sane Sisters at 1:54 PM