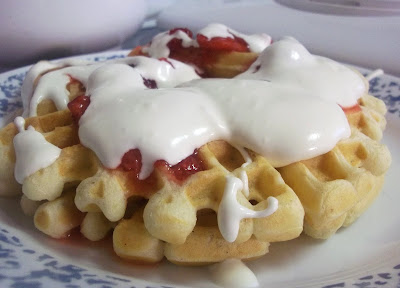 After I had been dating my (now) husband for about a month, he dropped a bombshell on me. He did not like whipped cream. I couldn't believe it! Who doesn't like whipped cream? I really thought this might be a deal-breaker. Better to find out early in a relationship, right?

Then, I found out that he loves whipped cream, he had just never had the real thing. (Whew!) For some reason, all of his life up until that point, he had been under the erroneous impression that the whipped topping you get in a tub from the grocer's freezer section is actually whipped cream. I don't know how anyone could be so cunning and devilish as to let their kids believe such an incidious lie. (I do get along rather well with my mother-in-law, and if not for this and a few minor things, she'd be nearly perfect.)

When I was a kid, I had quite a liking for whipped topping. Maybe that was because it was such a rare item in our household. But, as I have always enjoyed figuring out how to make things on my own, I convinced our mom to let me try making it. I looked at the ingredient list, which was probably about 30 ingredients, but the four that were recognizable were: water, oil (can't remember if it was veggie or soy), high-fructose corn syrup and vanilla flavoring.

After such a successful experiment, one might think I'd be making whipped topping often from then on. Not so. I think that's about the time I became disillusioned with the stuff. I guess that knowing my dessert was topped with water, oil, and corn syrup just ruined it for me.

Now, back to the cream. My husband is not nearly picky enough. He actually likes spray cream. In fact, he will buy it and spray it straight into his mouth. Ewwwww! Have you ever noticed that when you spray it on something and let it sit for more than half of a minute, it turns into a watery mess? Not appetizing. The cans assure me that they contain real cream, but I don't know what black magic they do to make something as wonderful as cream turn into that. And I don't want to know. I'm not fond of happy gas, either.

In my opinion, whipped cream, when used as a topping, should be whipped enough to add volume, but not too stiff. It should be able to run into the nooks and crannies of whatever it is garnishing. I buy mine in the cardboard cartons that open like a school-lunch milk. I like the screw-top lids, but they're not often available. So, to keep my cream fresh and from tasting like the onions that are frequently in my fridge, I staple the carton shut after using it. It's very easy to remove the staple on the next occasion that calls for cream.

Use whipped topping if you must, but as for me and my house, we'll serve real cream. And whatever you do, don't perpetuate the notion that whipped topping is cream. It's just not fair.
Posted by The Almost Sane Sisters at 1:57 PM

Email ThisBlogThis!Share to TwitterShare to FacebookShare to Pinterest
Labels: cream