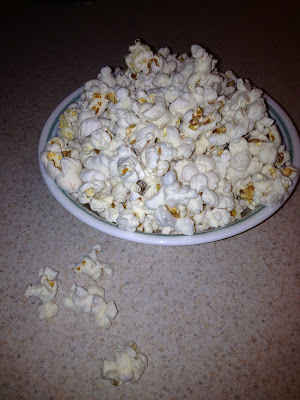 Popcorn is a staple in my house.

I come by the affinity honestly. When we were children, we had an old electric air popper. It was bright 70s yellow and may even have been a wedding gift to my parents. It earned it's keep. Sis 2 was the queen of popcorn. She made sure we pulled out the popper at least every Sunday night. 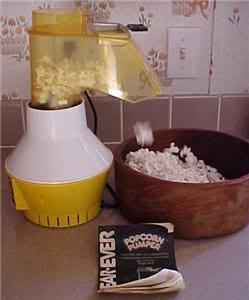 (This is not our old popper, but it looks incredibly like ours!)

We used to fight over who got to measure the popcorn seeds into the little cup at the top of the popper. Rotating the cup on its pegs to drop the seeds into the heating cavity was a thrill not to be missed.

Once the "on" switch was flipped, magic began. We watched as the seeds swirled around faster and faster, until "POP", one little white kernel would appear. A few seconds later. POP. POP. POP, POP, POP! The kernels multiplied until they began to force their way up the throat of the popper and finally spew out the mouth. Then it was a rush to position the popcorn bowl just right to catch the flow.

We had a giant stainless steel popcorn bowl that moonlighted as a bread mixing bowl. It was big enough for 7 loaves of bread or two full batches of popcorn. For a family of 9, large quantities were essential.

As the popcorn spewed out, we carefully turned the bowl to ensure proper distribution and to prevent overflow. Invariably, after most of the popcorn had been expelled, a few last kernels would be left spinning powerlessly in the bottom of the popper. Without the propelling force of the mass, they were trapped. Not to worry. We made sure to shake out every last one.

Our popper had a metal tray that fit into the top, right above the mouth. This was supposedly for melting butter. The heat from the popping corn was supposed to be enough to melt the butter. It wasn't, or maybe we just used too much butter. In any case, we only used the tray as a plug to keep the popcorn from flying out the top. (Leaving the tray off was quite exciting, but rather frowned upon by the higher ups.)

Instead, we melted our butter--or margarine rather, since butter was too expensive a luxury--in the microwave. When the margarine was all golden and liquidy, one of us would pour while another spun the popcorn bowl. Next came salt. Lots of salt. A few good mixes from several pairs of bare hands and we were set!

Occasionally, we'd add taco seasoning instead of salt. When were lucky, Mom would let us make carmel to pour over. Usually, we stuck with plain margarine and salt. Whatever the flavor, popcorn never lasted long in our house. When finished, the bowl took the place of honor in the middle of the living room floor, with us kids surrounding it. We each filled a paper towel with booty and munched away, refilling as needed. Sometimes we played games as we ate. Sometimes we watched a movie. Usually, we just talked and joked and laughed.

Although I'm married now and live away from home, I still think a week is vastly improved by a bowl of popcorn. I've graduated to a stovetop "Twirly Pop" and ditched the margarine, but still like salt. Lots of salt. 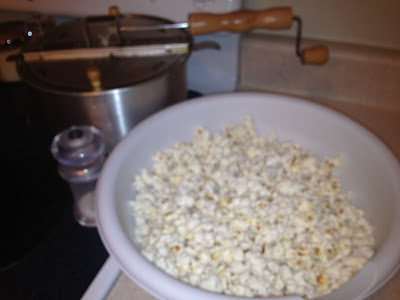 Making the salt stick is an art. The secret is to sprinkle it on just as soon as you pour the popcorn into the bowl. If you catch it when it's still warm, the steam produced from popping is enough to adhere the salt, without you having to add more butter or oil. Just the teaspoon of oil required for popping is sufficient.

You know what? I think I'll make myself a bowl of popcorn.
Posted by The Almost Sane Sisters at 10:59 AM