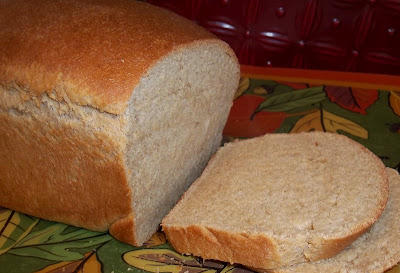 I finally made bread today. It's been several weeks and I even resorted to buying a couple of loaves from the store.

When I was a kid, I loved wheat bread, especially as toast, under egg gravy. Yep. Sounds delicious. Now, I never even make white bread.

I used to think that homemade wheat bread had to be very dense and heavy. That's all I'd ever had. After about four years of marriage, I went to a stake seminar by a lady they called "the wheat lady". I don't know her name. She said that the key to making light and soft wheat bread is to use dough enhancer.

So, I went and bought dough enhancer (and I kneaded a lot more than I had in the past). Sure enough my bread turned out tall and soft instead of, as she called it, a brick.

I haven't bought dough enhancer since. And guess what? My wheat bread is still tall and light. I used soy-based dry milk substitute for a while, but I have a lot of powdered milk that I am trying to rotate, so now I just use that.

Unfortunately, I can't give you a recipe for my bread. (There isn't one.) But I'll approximate.

Place water in bowl of mixer (or large mixing bowl). Add honey and dry milk. Stir a bit. Sprinkle yeast over the top of the water. Stir a little more. Dump approximately 2 cups of whole white wheat flour on top of water. Pour in oil and sprinkle in salt. Add about another 2 cups flour. Turn on your mixer. With the mixer running, add flour about a cup at a time just until the dough pulls away from the side and bottom of the bowl. Now stop adding flour. Knead for about 4 minutes and check dough. If it's gotten too sticky, add a little more flour. Keep kneading for about 6 more minutes. (You need to knead whole wheat flour much longer than white flour to activate the gluten. I believe that this is the real key to non-brick-like bread.)

Cover and let raise until roughly doubled in size. Shape loaves and place equal parts in three well-greased tins. Let raise until the dough reaches the tops of the pans. Preheat the oven to 350. By now your bread should be higher than the tops of the tins. Bake for 35 minutes. Remove from pans to wire cooling rack immediately. Butter the tops if desired.

Once the bread is cooled, I like to slice it before putting it in bags. I usually put two loaves in the freezer for later. When the bread is pre-sliced, my kids can make their own sandwiches, toast, etc. without cutting themselves or destroying a loaf of bread. If I'm in a hurry and didn't get the bread out of the freezer in time, I can also place a frozen slice in the toaster, which defrosts it perfectly.
Posted by The Almost Sane Sisters at 7:42 PM