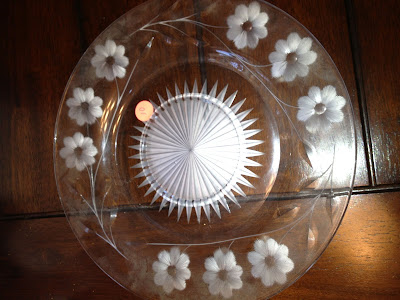 Saturday morning, I took a trip to the Oakland Temple. As I pulled off the freeway, I was met by large yellow signs, spaced 50 yards apart. Contradicting the large block arrows, I proceeded the half-block to the temple.

When I left the temple parking lot an hour and a half later, I was again met by the large enticing signs, "Estate Sale. 10 a.m. to 4 p.m." I looked at my clock. 10:30. Why not? My husband was working and I had no pressing schedule. So, I followed the signs.

The narrow, hilly street was lined with cars, so I had to make full loop before finding a place to park. I hiked back down to the house with the sign and the wide-open door. On the outside, it was a pleasant-looking, older home with a nice yard and slightly trampled grass. On the inside, it was a swarm of activity.

Tables had been placed around the perimeter of every room. Each table was surrounded by small groups of people, browsing through the piled up treasures--all the neat old stuff you'd expect to find in your grandparents house. Glass figurines. Black and white photographs. Brass table lamps with gaudy shades. Felt hats and silk print scarfs. Trays and trays of beaded necklaces and broaches. The faded books in the shelves were all marked for sale, so were the framed oil prints and photographs still hanging on the walls.

In the basement, I discovered a whole workshop of power tools. A radial arm saw. A drill press. A miter saw and band saw. Heavy duty routers and drills. For an instant, I was in heaven. Then I recalled my California apartment and its utter lack of work or storage space. Rats.

Going back upstairs, I concentrated on something more practical. China. Oh, but this grandmother had beautiful china. Her dinner set was all white, with delicate, scalloped edges. The full set of 24 plates, tea cups and saucers, gravy boat and serving dishes could have been mine for a comparative song. I was sorely tempted, but once again had to lament my lack of storage space--and frugality.

With an inward sigh, I pulled myself away. Instead, I contented myself, with two platters. The first I found was round, with a starburst and flowers etched into the underside of the glass. Very feminine and pretty. 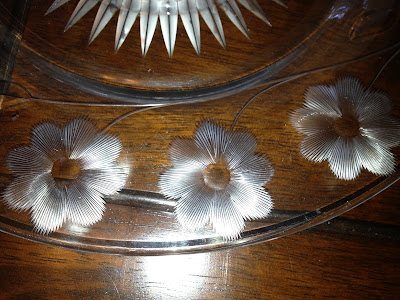 The second, I unearthed from a pile of water-stained, black and white photographs. The photographs themselves were very interesting, but the platter more so. Under the thick dust, it was white, semi-porcelain, with decorative edges and a light blue flora pattern. 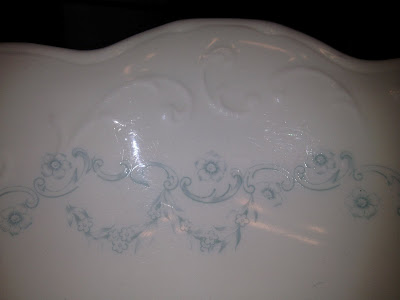 On the back, I discovered a little sticker proclaiming its history. Apparently, the platter was originally bought in 1895. How I wish I knew the story of all the dinners and parties it has seen! 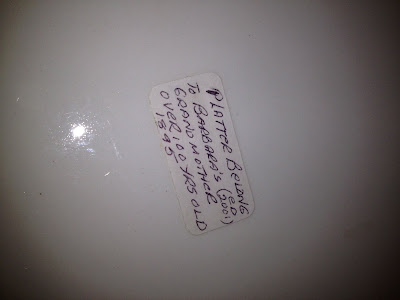 At the little checkout table, I handed my two platters to the somewhat flustered girl. She was trying to help me and a lady with an old hoover vacuum at the same time. By her own search, the girl confirmed what I had just told her. The larger platter didn't have a price tag. So, she gave me the same price for both. All told, I spent $20! A trip to the temple, an adventure, and treasure to boot--I call that a morning well spent. 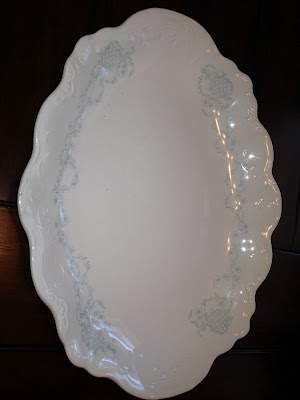 Posted by The Almost Sane Sisters at 5:13 PM