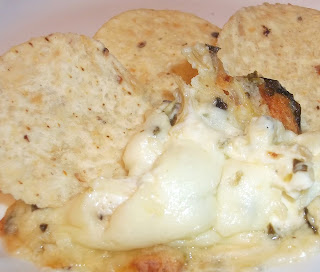 I remember the first time I had Spinach Artichoke Dip. Sis 2 brought it to a dinner party at my house and I was smitten. I've ordered it at several different restaurants and been disappointed every time. I think I got Sis 2's recipe, but I changed it a bunch, because that's just how I cook. I used that version for several years, but lately, I've been on a yogurt kick, so I redid the recipe again. It has less fat (I'm not going to pretend it's low-fat, because it isn't, but now it doesn't have a pool of grease on top when you reheat it.) and tastes every bit as good.

Preheat oven to 350 degrees farenheit. Mix first 8 ingredients in a large bowl. Drain artichoke hearts, then chop them into 1/2 inch pieces. Now pick them up in your clean hands and squeeze them over the sink, as if you were wringing a dishtowel. They need to be as dry as possible, or your dip will be runny. Put the artichoke hearts into the bowl. Now squeeze the spinach juice out the same way. Stir the artichokes and spinach into the other mixture. Since you squeezed them so hard, they'll be in clumps that need to be broken up.

Bake 30 minutes, or until top is bubbly and golden-brown.

Serve hot with crackers, chips or bruschetta.
Posted by The Almost Sane Sisters at 8:27 PM